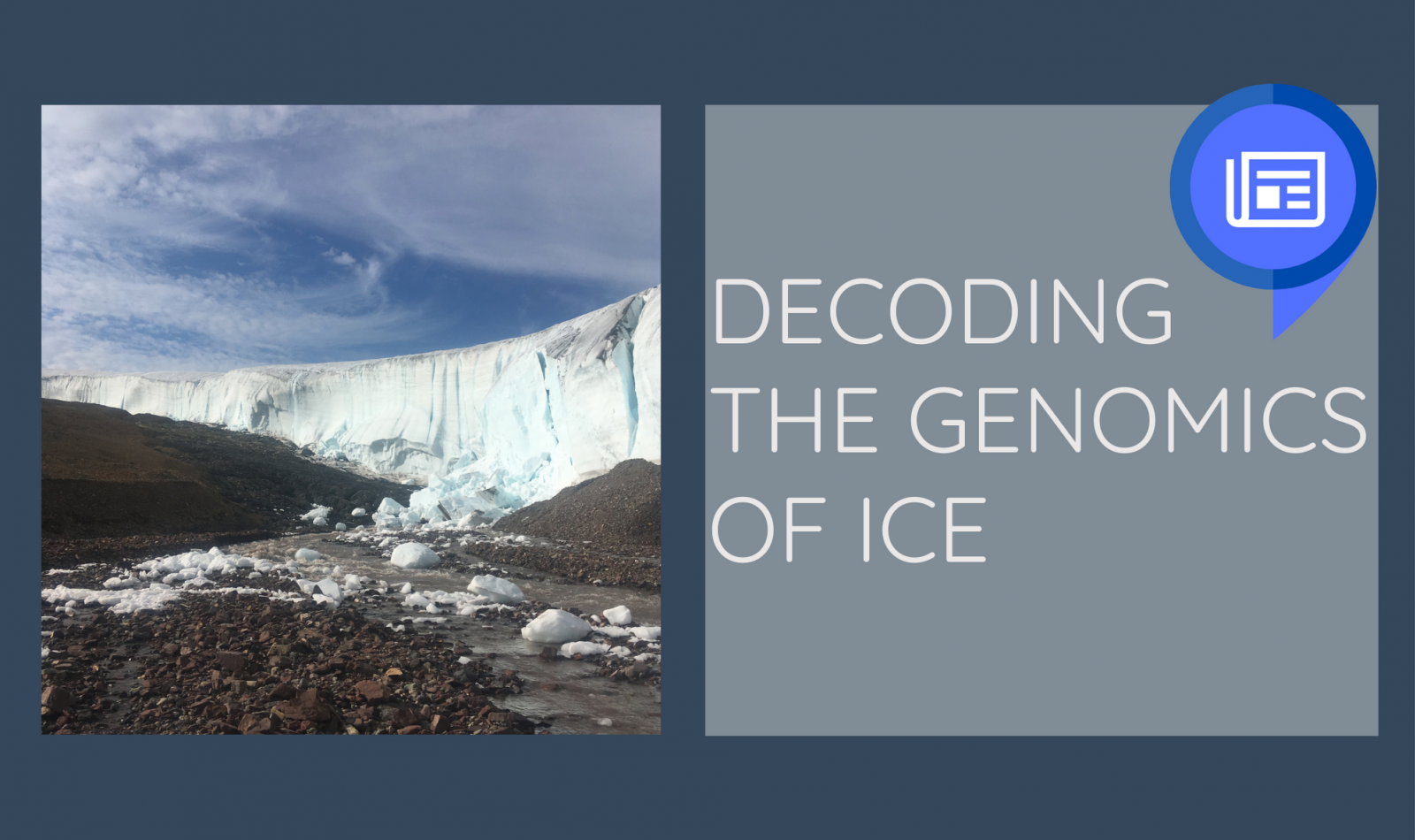 Spotlight on Northern Research | Decoding the genomics of ice

Like the tree that hides the forest, the polar bear is the animal that hides Arctic biodiversity in Nunavut. The white plantigrade is not the only one to suffer the effects of climate change, microorganisms are also affected and they are the basis of ecosystems, the resources of northern communities and potentially a reservoir of useful genes for medicine.

Catherine Girard, professor in the Fundamental Sciences Department at the Université du Québec à Chicoutimi, has set a research objective to establish a portrait of the microbiodiversity of the Arctic cryosphere, to follow its evolution with climate change and what the consequences would be for northern communities.

The cryosphere encompasses frozen habitats such as glaciers, pack ice, snow, permafrost and is full of life. Even on glaciers, "you can measure bacterial respiration and there is photosynthesis. Sometimes glaciers are covered in red because of the photosynthetic pigments of certain cyanobacteria," states Catherine Girard. But with global warming, glaciers are melting, the permafrost is thawing and the microorganisms in the cryosphere, released from their icy habitat, end up in melt water and even in aerosols. "What interests me is understanding how the cryosphere releases microorganisms into the rest of the landscape. All these microorganisms land downstream in a niche already occupied by others," continues Catherine Girard.

Once out of the icy environment to which they are adapted, the microorganisms in the cryosphere may not find themselves in viable conditions. In which case, it would be a loss of microbial diversity. Microbiodiversity is just as valuable as macrobiodiversity," says Catherine Girard. It is part of the living heritage. If icy habitats disappear, microorganisms will be lost. Their genome contains a lot of information on bacterial evolution. It is also a reservoir of genes with the potential to develop new technologies".

However, some microorganisms in the cryosphere could survive in their new habitat at the risk of altering the ecosystem balance and altering the quality of resources for northern communities. "The microorganisms are changing the basis of the food web and this could have an impact on fish resources," she says. The Inuit also have the custom of making their tea with water taken from natural environments, but what will be the quality of this water?

To answer these questions, she and her research team are collecting samples of ice, snow, melt water, lake and river water, and aerosols to harvest microorganisms for genomic screening. She wants to inventory and quantify the microbial species present in ice, melt water, aerosols, lake water and to understand the connectivity between these different environments. She also plans to model these shifts in microbiodiversity as a function of meteorological data and climate change. This is her dream, and since Catherine Girard is at the beginning of her career, she has time to make it come true.

The art of collaborating with northern communities

This is not only Catherine Girard's research project. Of course, she collaborates with other scientists, notably Alex Culley, Warwick Vincent and Caroline Duchaine. But above all, this project is affiliated with their collaborators from Resolute Bay. The professor didn't venture from the south to present a pre-existing research project to them. She developed it with them.

"The Inuit are reluctant to welcome scientists and answer their questions as if they were research objects," says Elise Imbeau, who lives in Nunavut and works as a science support officer for her company Viventem.

Working with Catherine Girard, she has demonstrated her ability to interact with northern communities. Since her bachelor's degree in 2009, Catherine Girard has been forging ties with the people of Resolute Bay. "She has made friends and she has taken the time to be there in her natural state and not as a scientist who comes to show them things," says Elise Imbeau. "I spend a lot of time in the community and I see the concerns come up in conversations. By letting science reveal itself to us, the projects appear," says Catherine Girard.

When talking about science, Catherine Girard also knows how to find the right words, because it is not enough to popularize science as we would do by speaking to the general public. "Scientists need to understand that not everyone is interested in their molecular biology stories. We need to find cultural references," stresses Elise Imbeau. For example, simply talking about the place of zooplankton in the food chain will not necessarily appeal to the Inuit. They will be more concerned if they are told that zooplankton is fish food, that good quality zooplankton will produce richer fish that will keep people healthy. Catherine Girard therefore has the challenge of inserting her research on viral and bacterial genomics into the cultural referent of the Inuit. "That's what's remarkable. Catherine managed to interest people with her DNA stories. It's easier for scientists working on caribou to interest communities," compares Elise Imbeau.

Catherine Girard doesn't just get Inuit interested in her research. She sets up research projects, writes grant applications with them and then hires them to participate in laboratory or field work. "Our northern collaborators have an incredible knowledge of the field and can point out interesting sampling points. We benefit enormously from this sharing of traditional knowledge. They are researchers as much as I am," she insists. The research must answer the questions and issues of their communities. It is their home and they are the ones who have an intimate relationship with the land and the cryosphere, not me.