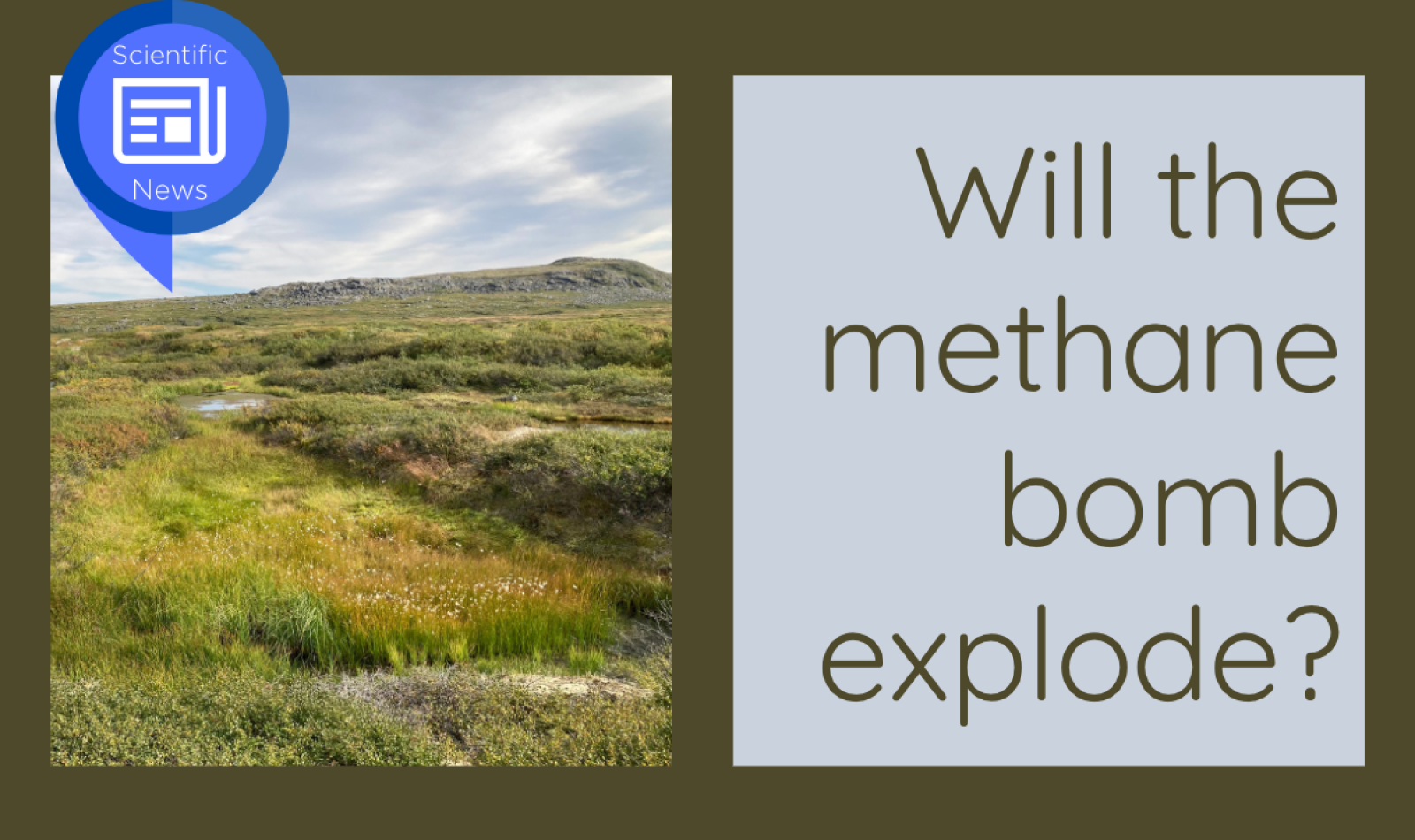 Will the methane bomb explode?

With climate change and thawing permafrost, peatlands are often considered a "methane bomb" (Miner et al, 2022). This overlooks the fact that climate change is also resulting in greening of the Arctic and increased CO2 uptake through photosynthesis. The outcome may not lead to the anticipated methane bomb. Michelle Garneau, a professor in the Department of Geography at the Université du Québec à Montréal, explains.

Between photosynthesis and decomposition

In peatlands, it is mainly the sphagnum mosses that accumulate carbon and this accumulation is the result of two antagonistic phenomena: the absorption of CO2 by photosynthesis and the emission of CO2 and methane by the decomposition of organic matter. However, below the surface, wet, acidic and anoxic conditions prevent the decomposition of sphagnum debris. "The accumulation of organic matter is more important than decomposition and that's why peatlands are net carbon sinks," says Michelle Garneau.

But climate change could alter the outcome of the equation as thawing permafrost and the formation of thermokarst pools promote the decomposition of organic matter. The gas exchange balance could tip in favor of emissions and raises fears of a methane bomb. "Many studies have focused on methane emissions from thermokarst pools, but they haven't looked at the land areas adjacent to the pools. So, we don't know the net balance of these changing peatlands," says Michelle Garneau. However, her work shows that near ponds or in former shallow ponds, the surfaces become greener and accumulate more carbon.

A revival of photosynthetic activity

Aerial images show that the bogs are turning green. The frozen, dry and mostly lichen-covered soil tends to be colonized by beds of sphagnum mosses that expand vertically and horizontally. To assess the extent of this deep accumulation, Michelle Garneau's team took core samples from the bog soil and analyzed them cm by cm. The samples were dated with 14C and 210Pb and examined under a microscope to identify plant remains. "About 20 cm below the surface, conifer needles and seeds were identified in a highly decomposed woody peat above which sphagnum moss has accumulated since about 1990. This means that there has been a hydrological change to allow the bryophytes to grow," describes Michelle Garneau. Scientists have an indicator to estimate the level of water in a bog: Thecamoebians. These are amoebae that are sensitive to water conditions and have a siliceous shell that resists decomposition and allows them to be identified. "The different genera occupy particular ecological niches depending on the height of the water level. In each slice of core, we can reconstruct the level of the water table during a given period," explains Michelle Garneau. The Thecamoebians observed in the core studied by her team (Lamarre et al, 2012) do indicate a variation in water content that also corresponds to the change in vegetation. This transition from conifers to sphagnum mosses resulted in an increase in the rate of organic matter accumulation. Sphagnum accumulation over a 30-year period represents a thickness of 12 cm in the core, whereas the accumulation of coniferous woody debris over a 120-year period between 1990 and 1870 represents only 7 cm. The recent accumulation will compact and partially decompose," acknowledges Michelle Garneau, "but the growth continues to increase year after year compared to that of the past. This is evidenced by the carbon content measurements: 170 g/m2/yr in the sphagnum sections and 23.6 g/m2/yr in the woody debris sections.

Thus, there is a vertical accumulation of sphagnum moss that is reflected in an increase in carbon accumulation in the bogs.

Which way will it go?

It is true that thawing permafrost increases the decomposition of organic matter in thermokarst ponds and leads to methane emissions. But climate change also extends the growing season, allowing colonization by sphagnum moss, which results in increased carbon accumulation in peatlands. The research results do not yet confirm which way the balance between decomposition and accumulation will go and whether the methane bomb will explode or not. This is an equation that Michelle Garneau will try to solve in her new collaboration with Pascale Roy-Léveillé, holder of the new Sentinel North Chair on permafrost in Nunavik.